5. Abraham’s Aliyah: 4000 years ago but still heard around the world today

Even though Israel is a small country it is always in the global news.  This news often reports on the unending conflicts between Israeli Jews and their neighbours, and the search for peace.  Even if there is no actual warfare there is continuous tension.  How did this start?  Many people look back only as far back as the birth of Israel in 1948.  But if we are to understand the situation we need to look back much further.  We need to go back to the ancient history of Israel recorded in the Torah. A look at Israel’s history in the book of Genesis of the Bible reveals that 4000 years ago a man, who is now very well known, went on a camping trip in this part of the Middle East.  The Bible says that his story affects our future.  This ancient man is Abraham (or Abram).  We all should be informed of his story so we can understand our situation in difficult modern times.

The Promise to Abraham – Son of Terah

Abraham is introduced in the Bible in Genesis 12 with God making a promise to him:

“I will make you into a great nation, and I will bless you;

I will make your name great, and you will be a blessing.

I will bless those who bless you, and whoever curses you I will curse;

and all peoples on earth will be blessed through you.” (Genesis 12:2-3)

Many of us wonder if there really is a G-d and if He really is the G-d of the Bible. Jewish history has been so long and difficult that to many people it seems that no G-d has guided it.  But in this promise to Abraham, G-d said ‘I will make your name great’ and today the name of Abraham/Abram is known worldwide.  It is not simply that Abraham is known among the Jews, his descendants.  But literally billions of people on the planet today know the story of Abraham.  These people are from all countries around the world.  This promise has literally come true. The earliest existing copy of Genesis is found in the Dead Sea Scrolls and is dated 200-100 B.C. which means the promise has been in writing at least since that time. In that time the name of Abraham was known only among the scattered Jewish remnant.  So the fulfillment of this little promise only came true later, after it was written down.

… by means of his great nation

Surprisingly Abraham really did nothing important in his life.  He was not a great writer, king, inventor or military leader.  He did nothing except camp out where he was told to go and father a few children.  His name is great only because the children became nation(s) that kept the record of his life – and then individuals and nations that came from him became great.  The Jews are the people most known as descendants of Abraham.  This is exactly how it was promised in Genesis 12 (“I will make you into a great nation … I will make your name great”).  No one else in all history is so well-known only because of descendants rather than from great achievements in his own life.

…Through the Will of the Promise-Maker

Jews who descended from Abraham were never really a nation normally associated with greatness.  Jews did not conquer a great empire like the Romans did or build large monuments like the Egyptians did with the pyramids. Their fame comes from the Law and Book which they wrote; from some remarkable individuals that were Jewish; and that they have survived as a somewhat different people group for thousands of years.  Their greatness is not because of anything they did, but rather what was done to and through them.  The promise says repeatedly that “I will …”.  Their unique greatness happened because G-d made it happen rather than some ability, conquest or power of their own.

The promise to Abraham came true because he trusted a promise and chose to live differently than others. Think how likely it was for this promise to have failed, but instead it has happened, and is continuing to unfold, as it was stated  thousands of years ago.  The case is real that the promise came true only because of the power and authority of the Promise-Maker.

The Aliyah of Abraham – The Journey that still shakes the World 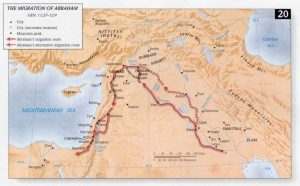 This map shows the journey of Abraham

The Bible then says that “So Abram left as the LORD had told him” (v. 4).  He began a journey, shown on the map that is still making history.

There is something else promised as well. The blessing was not only for Abraham. It says that “all peoples on earth will be blessed through you” (through Abraham). We should pay attention because you and I are part of ‘all peoples on earth’.  In fact this is true regardless of whether we are Jewish or not.  No matter what our religion, color, background, nationality, social status, or what language we speak – we are part of ‘all nations’.  This promise for a blessing includes everybody alive today! How? When?  What kind of blessing? This is not clearly stated here but since we know that the first parts of this promise have come true, we can have confidence that this last part will also come true.  We can begin to find the key to unlock this mystery by continuing with the Blessings and Curses of Moses to the Jews.

4 thoughts on “5. Abraham’s Aliyah: 4000 years ago but still heard around the world today”