The Hebrew Prophet vs. the Jewish Skeptic (Part 1)

We saw how Moses in the Torah and how Isaiah in the Prophets (Nevi’im) prophesied the dispersal, exile and the re-gathering of the Jews to the Land of Israel – events that are facts of Jewish history as well as modern-day happenings.  In doing so, they pass the test for Divine inspiration laid down long ago in the Torah

21 You may say to yourselves, “How can we know when a message has not been spoken by the Lord?” 22 If what a prophet proclaims in the name of the Lord does not take place or come true, that is a message the Lord has not spoken. That prophet has spoken presumptuously, so do not be alarmed.  (Deuteronomy 18: 21-22)

It is because these are persistent prophecies throughout the Tanakh that add credibility to this evidence.  For example, take the book of Ezekiel.  Ezekiel lived during the first exile (550 BC) in Babylon as shown in the timeline. 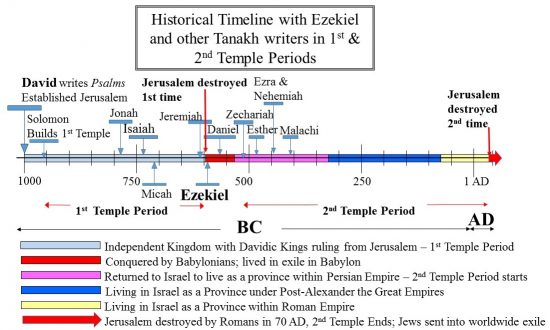 Ezekiel in Historical Timeline of the Temple Periods

In his book he describes a bizarre vision

The hand of the Lord was on me, and he brought me out by the Spirit of the Lord and set me in the middle of a valley; it was full of bones. 2 He led me back and forth among them, and I saw a great many bones on the floor of the valley, bones that were very dry. 3 He asked me, “Son of man, can these bones live?”

4 Then he said to me, “Prophesy to these bones and say to them, ‘Dry bones, hear the word of the Lord! 5 This is what the Sovereign Lord says to these bones: I will make breath enter you, and you will come to life. 6 I will attach tendons to you and make flesh come upon you and cover you with skin; I will put breath in you, and you will come to life. Then you will know that I am the Lord.’”

7 So I prophesied as I was commanded. And as I was prophesying, there was a noise, a rattling sound, and the bones came together, bone to bone. 8 I looked, and tendons and flesh appeared on them and skin covered them, but there was no breath in them.

9 Then he said to me, “Prophesy to the breath; prophesy, son of man, and say to it, ‘This is what the Sovereign Lord says: Come, breath, from the four winds and breathe into these slain, that they may live.’” 10 So I prophesied as he commanded me, and breath entered them; they came to life and stood up on their feet—a vast army. (Ezekiel 37:1-10)

A man is whisked away to a valley full of bones which start to rattle as they join together forming skeletons, and then dead flesh and skin wraps around the lifeless skeletons so that they become corpses. Then the wind blows wildly from all directions and the bodies all come to life and they stand up to become a great army.  This sounds like a script from a horror movie for Halloween!  But Ezekiel was not interested in sending shivers down our spines. He claimed that this script was a message from G-d Himself, Blessed be He.  To remove all guesswork, he explicitly wrote the meaning of his vision

One Nation Under One King

18 “When your people ask you, ‘Won’t you tell us what you mean by this?’ 19 say to them, ‘This is what the Sovereign Lord says: I am going to take the stick of Joseph—which is in Ephraim’s hand—and of the Israelite tribes associated with him, and join it to Judah’s stick. I will make them into a single stick of wood, and they will become one in my hand.’ 20 Hold before their eyes the sticks you have written on 21 and say to them, ‘This is what the Sovereign Lord says: I will take the Israelites out of the nations where they have gone. I will gather them from all around and bring them back into their own land. 22 I will make them one nation in the land, on the mountains of Israel. There will be one king over all of them and they will never again be two nations or be divided into two kingdoms. 23 They will no longer defile themselves with their idols and vile images or with any of their offenses, for I will save them from all their sinful backsliding, and I will cleanse them. They will be my people, and I will be their God. (Ezekiel 37:11-23)

The Jews in Ezekiel’s day did return from the Babylonian exile a few decades after this vision, but that was a return only from Babylon, and they remained only a province within the Persian Empire.  Ezekiel wrote of a return from ‘the nations’ ‘all around’ back to Israel where they would be ‘one nation’ with their own ‘king’ or government. That did not happen until thousands of years later when the modern state of Israel was formed in 1948.  For a nation of 8 million people, having 40% of the population do aliyah from almost half the countries of the globe in the 70 years since independence, after an exile of 1900 years, is nothing short of remarkable. Even more remarkable is that Ezekiel ‘saw’ it in his vision 2500 years ago.

But some who have reflected on this are unconvinced. Prominent among them is Sam Harris, a well-known Jewish American atheist.  Here is his objection:

“But just imagine how breathtakingly specific a work of prophecy would be, if it were actually the product of omniscience. If the Bible were such a book, it would make perfectly accurate predictions about human events. You would expect it to contain a passage such as ‘In the latter half of the 20th century, humankind will develop a globally linked system of computers-the principles of which I set forth in Leviticus-and this system shall be called the internet” The Bible contains nothing like this. In fact, it does not contain a single sentence that could not have been written by a man or woman living in the first century. This should trouble you.”

Harris mocks the prophecy in the Bible as being just coincidence. In his view, if you ‘predict’ something vague enough (regathering of Jews to Abraham’s Promised Land), eventually it will happen just by chance. He would be impressed if Ezekiel had prophesied timing it to the 20th century and linking the prophecy back to Leviticus. That would be real sign of G-d!

Unfortunately for Harris, Ezekiel was not yet finished. Because Ezekiel, in another really dramatic prophecy does predict the time – to the 20th century – and, almost as if there is some Divine humor in addressing Harris’s taunt, links it back to … the book of Leviticus. We take it up next here.