We saw how Ezekiel’s vision of Dry Bones coming back to life predicted the modern re-birth of Jewish Israel.   We also saw how Jewish skeptic Sam Harris was unimpressed with Bible prophecy.  He wanted to see a time-specific prediction relying on the Torah.  As if anticipating this challenge, Ezekiel was also commanded to do out something bizarre.  Here is what G-d, blessed be He, commanded him to do in a prophecy acted out:

6 “After you have finished this, lie down again, this time on your right side, and bear the sin of the house of Judah. I have assigned you 40 days, a day for each year. 7 Turn your face toward the siege of Jerusalem and with bared arm prophesy against her. 8 I will tie you up with ropes so that you cannot turn from one side to the other until you have finished the days of your siege.  (Ezekiel 4: 4-8)

Ezekiel was commanded to remain bound on one side and then on the other for over a year!  To give a little background, Ezekiel was writing from Babylon just before the Babylonians besieged Jerusalem (thus the reference to a siege).  This siege lasted many months but finally Jerusalem was conquered in 586 BCE by the Babylonians, the city was burned, the First Temple destroyed and the Israelites sent to exile in Babylon.  Ezekiel would soon meet the captives brought from the siege of Jerusalem after he had acted out this prophecy.

But why were the Babylonians besieging Jerusalem?  They had defeated the Jewish nation in a war in 606 BCE and so the Israelites had, in effect, lost their independence that year.  Most were permitted to remain in Judah, but some, like Daniel, were sent to Babylon in this first wave of deportation that occurred in 606 BCE.  The Jews in Jerusalem at first grudgingly swore allegiance and paid tribute to the Babylonians but later on revolted against them.  So the Babylonians came and laid siege to Jerusalem, mercilessly crushing it in 586 BCE.  The kings of David have never reigned since then.

Note how Ezekiel referred to the ‘House of Israel’ and the ‘House of Judah’.  After Solomon, around 900 BCE, the Israelites had split into two political countries – Judah and Israel.  This was a similar situation to Koreans today – one people divided politically into the two countries of North and South Korea.  The ‘House of Israel’ had already been conquered as a political entity around 722 BCE by Assyrian.  See more details on history of Israel here.

In this acted drama, Ezekiel prophesied a period of 390 days + 40 days = 430 days, with each day representing a year (v. 5 & 6).  So he was prophesying 430 years to pay ‘for sin’.  Where does this idea that such a payment for sin was required?  The parting Blessings and Curses of Moses stated that if they sinned they would pay for their sin in being exiled from their land.  So Ezekiel was now prophesying from this principle rooted in Deuteronomy that they were to enter 430 years of exile.

Today we commonly use the 365.244-day year (the Gregorian calendar) and the traditional Hebrew calendar based on lunar months with extra ‘leap-months’ added to keep lunar year from moving away from the solar year.  In ancient Egyptian, Babylonian, Indian and Greek civilizations a 360-day calendar was common, and it was the year length that Daniel used and is the basis of the prophetic year used in the Torah. We will need to convert Ezekiel’s 360-day years to our solar years to understand his prophecy in our calendar.  But there is another twist to consider first.

While Ezekiel was in Babylon prophesying 430 years of exile his contemporary, Jeremiah, living through the siege in Jerusalem wrote:

Jeremiah prophesied 70 years … not 430.  So which was it – 70 or 430?  It turns out that in 539 BCE the Babylonians were conquered by Medes and Persians.  King Cyrus of Persia then permitted the Jews in Babylonian exile to return to Jerusalem.

So the Babylonian exiles arrived back in Jerusalem 537 BCE.  From the initial deportation in 606 BC to 537 BC – Jeremiah’s prophecy of destruction of the Babylonians and return to Jerusalem in 70 years was fulfilled.  Now this is precise, but not impressive.  Sam Harris would certainly point out that it would have been easy for later editors of Jeremiah’s book to insert the ‘prophecy’ to ensure a ‘fulfillment’.  Since the earliest existing copies of the prophetic books are the Dead Sea Scrolls from 200-100 BCE we cannot be sure that it did not happen this way.  If this was all we had we would have to agree with Harris that it would be inadequate evidence of Omniscient prophecy.

But is there not also a contradiction between Jeremiah and Ezekiel?  They seem to be predicting mutually exclusive things – one an exile of 70 years and the other an exile of 430 years.  It would be impossible for both to be right.  Or is it?  Because if you go to the ‘principles in Leviticus’ that Harris had asked for you will see the following:

if you reject my decrees and abhor my laws and fail to carry out all my commands and so violate my covenant, 16 then I will do this to you: … 17 I will set my face against you so that you will be defeated by your enemies; those who hate you will rule over you, and you will flee even when no one is pursuing you.

18 ” ‘If after all this you will not listen to me, I will punish you for your sins seven times over. 19 I will break down your stubborn pride and make the sky above you like iron and the ground beneath you like bronze…

21 ” ‘If you remain hostile toward me and refuse to listen to me, I will multiply your afflictions seven times over, as your sins deserve…

40 ” ‘But if they will confess their sins and the sins of their fathers—their treachery against me and their hostility toward me, 41 which made me hostile toward them so that I sent them into the land of their enemies—then when their uncircumcised hearts are humbled and they pay for their sin, 42 I will remember my covenant with Jacob and my covenant with Isaac and my covenant with Abraham, and I will remember the land. 43 For the land will be deserted by them and will enjoy its sabbaths while it lies desolate without them. They will pay for their sins because they rejected my laws and abhorred my decrees.  (Leviticus 26: 14-43)

G-d, blessed be He, stated that if they did not obey the Law they would be defeated by their enemies who would rule over them (v. 17).  This warning provided the background for Jeremiah’s declaration of a 70 year exile which started with the first Babylonian deportation (606 BC) and ended when a Jewish remnant returned back to their land in 537 BC.

Then v. 18 says ‘If after all this…’ (i.e. the sequence of events from disobedience, conquest, exile and return) they still remained ‘hostile’ to G-d and did not ‘listen’ to His commands the punishment for sins would be multiplied seven times over.  This is repeated directly in v. 21, 23 and 28.  Events unfolded just that way.  The Jews were to return to the Land to renew their hearts – which they never really did.  Only a small remnant returned … they struggled for years to be motivated to rebuild the Second Temple which they grudgingly accomplished but few were interested in putting out the effort … Nehemiah brought another group 80 years later when permission to rebuild Jerusalem was given.  But as a people they continued to pursue their own interests and are scolded by Nehemiah for their exploitation of the poor and intermarriage.  Malachi, the last book of the Tanakh written, was a plea for them to remain faithful in their marriage covenants and in their offerings to G-d – which they did not do.  They remained hostile to Him.

So the punishment, according to this Leviticus principle, was multiplied seven times over.  Only after the full seven-times payment was made would G-d, blessed be He, remember the covenant made with Isaac, Abraham and the land (v.42).  What was that covenant?  G-d had promised Abraham that He would give his descendants the land.  In other words, only after the full seven-fold payment was made would Jews be allowed to claim and rule that land that G-d had originally promised to the Hebrew patriarchs.  When they returned by Cyrus’s Edict they only did so as a vassal province within the Persian Empire.  The Persians still ruled and controlled the land.  Jewish rule would have to wait until the seven-fold payment was made.

Let us now convert these to our solar years and put it on a timeline:

Ezekiel’s remaining seven-fold years would be: 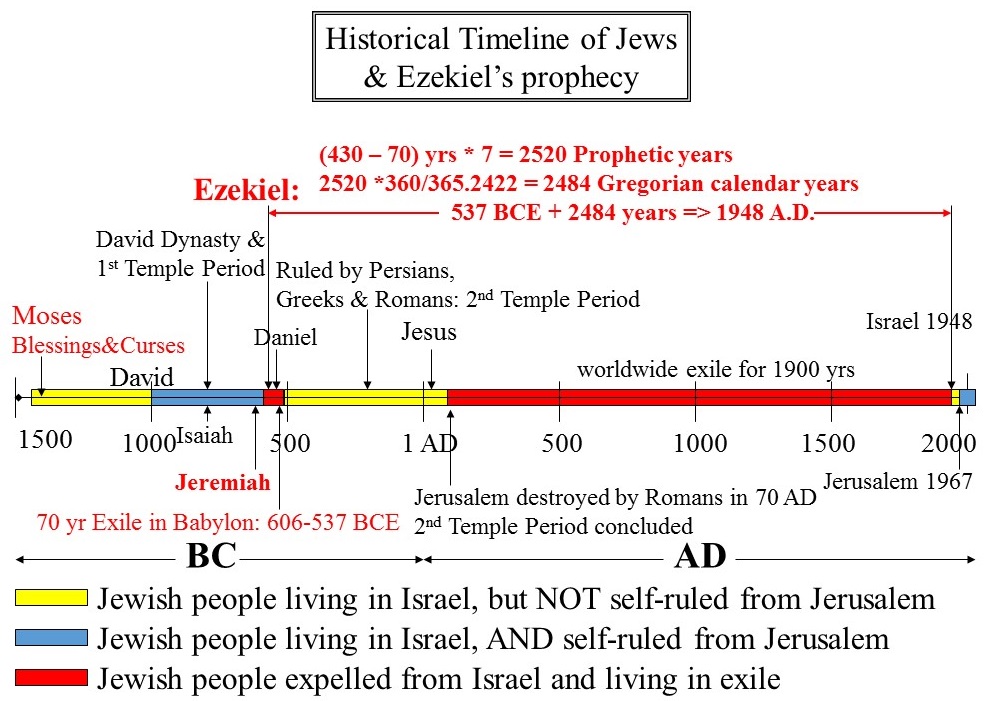 Historical Timeline of Jews from Moses to Present-Day, showing Ezekiel & his Exile Prophecy

What happened in 1948?  That was the year Israel was re-born as a modern nation – an independent and self-ruled Jewish country.  Most remarkable, Ezekiel, with some ‘principles from Leviticus’, saw it 2500 years ago – precise to the year!

So let’s reflect. Sam Harris challenged the Bible to predict something for “the latter half of the 20th century”, using “principles from Leviticus”, and doing so would show it to be a “product of omniscience”.  Harris gave this challenge because he figured it was impossible – but he never actually looked.  He thought that ‘within half a century’ was hard enough so no one would attempt it.  Ezekiel, with some principles from Leviticus, was bang on to the year starting about 2500 years ago, in predicting the re-birth of Israel in 1948, and in the process, managed to resolve a seeming contradiction with Jeremiah.  I’d say that is pretty good.  At the very least, whether we are Zionist, anti-Zionist, ultra-orthodox, Reformed – or Christian, Muslim, atheist or something else this is something worth being informed about even as we may weigh the implications differently.  In my next post I will look at how Jerusalem and the Temple Mount (Kotel) fits Ezekiel’s (with some principles from Leviticus) far-seeing predictions.

4 thoughts on “The Hebrew Prophet vs. Jewish skeptic (Pt. 2)”