What was the History of the Jewish People?

Jews are one of the most ancient peoples in the world. Jewish history is recorded in the Bible, by historians outside of the Bible, and through archeology. We have more facts about Jewish history than that of any other nation – which we will use to build a timeline to summarize the history of the Jews.

The timeline starts with Abraham, the founder of the Jewish people, who lived about 2000 BC.  He is even named outside the Bible in ancient clay tablets, dated around 1950 BC in contracts between him and kings in Babylonia.

“The name of Abram – Abu-ramu ‘the exalted father’ – is found in early Babylonian contracts”  AH Sayce. The ‘Higher Criticism’ and the Verdict of the Monuments. 1894 SSPCK  p. 159

Abraham and Patriarchs in Historical Timeline

Abraham was a real historical figure, as well as the man who believed promises from G-d, blessed be He, of a land and a people.  The timeline continues with the green bar when Abraham’s descendants were slaves in Egypt. This period of time started when Joseph, great-grandson of Abraham, led the Israelites to Egypt, where later on they became slaves.

Moses: The Israelites become a Nation under G-d

Moses led the Israelites out of Egypt with the Passover Plague, which destroyed Egypt and allowed the Israelite Exodus from Egypt to the land of Israel.  Moses wrote the Torah, and at its end, Moses prophesied Blessings and Curses on the Israelites.  They would be Blessed if they obeyed G-d, blessed be He, but experience a Curse if they did not.  These Blessings & Curses were to follow the Jewish people ever after.

From Moses to David the Israelites lived in the land of Israel, but without Jerusalem and with no king

For several hundred years the Israelites lived in their land but they did not have a King, nor did they have the capital city of Jerusalem – it belonged to other people in this time. However, with King David around 1000 BC this changed. 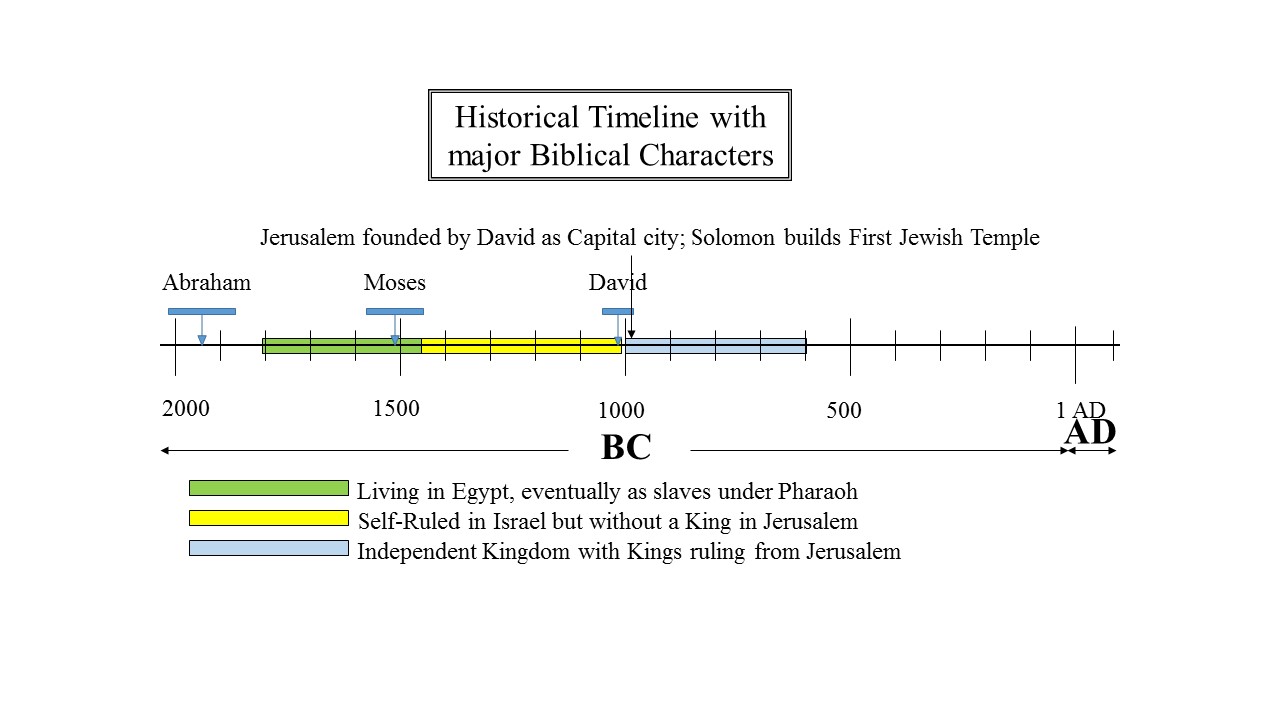 Living In land of Israel with Davidic Kings ruling from Jerusalem

David conquered Jerusalem and made it his capital city. He received the promise of a coming ‘Messiah’ and from that time Jews have awaited Messiah’s coming.  David’s son Solomon succeeded him and Solomon built the First Jewish Temple in Jerusalem. The descendants of King David continued to rule for about 400 years and this period is shown in aqua-blue (1000 – 586 BC).  This was the period of Israelite glory – they had the promised Blessings.  They were a powerful nation, had an advanced society, culture, and their Temple. But the Tanakh also describes their growing corruption and idol worship during this time.  The Israelites split into two different countries.  Many prophets in this period warned the Israelites that the Curses of Moses would come on them if they did not change. But these warnings were ignored.

The First Jewish Exile to Babylon

Finally around 600 BC the Curses happened. Nebuchadnezzar, a powerful Babylonian King came – just like Moses had predicted 900 years before when in Torah he wrote:

The Lord will bring a nation against you from far away … a fierce-looking nation without respect for the old or pity for the young. … They will besiege all the cities throughout the land. (Deuteronomy 28: 49-52)

Nebuchadnezzar conquered Jerusalem, burned it, and destroyed the Temple that Solomon had built. He then exiled the Israelites to Babylon. This fulfilled the predictions of Moses that

You will be uprooted from the land you are entering to possess. Then the Lord will scatter you among all nations, from one end of the earth to the other. (Deuteronomy 28:63-64) 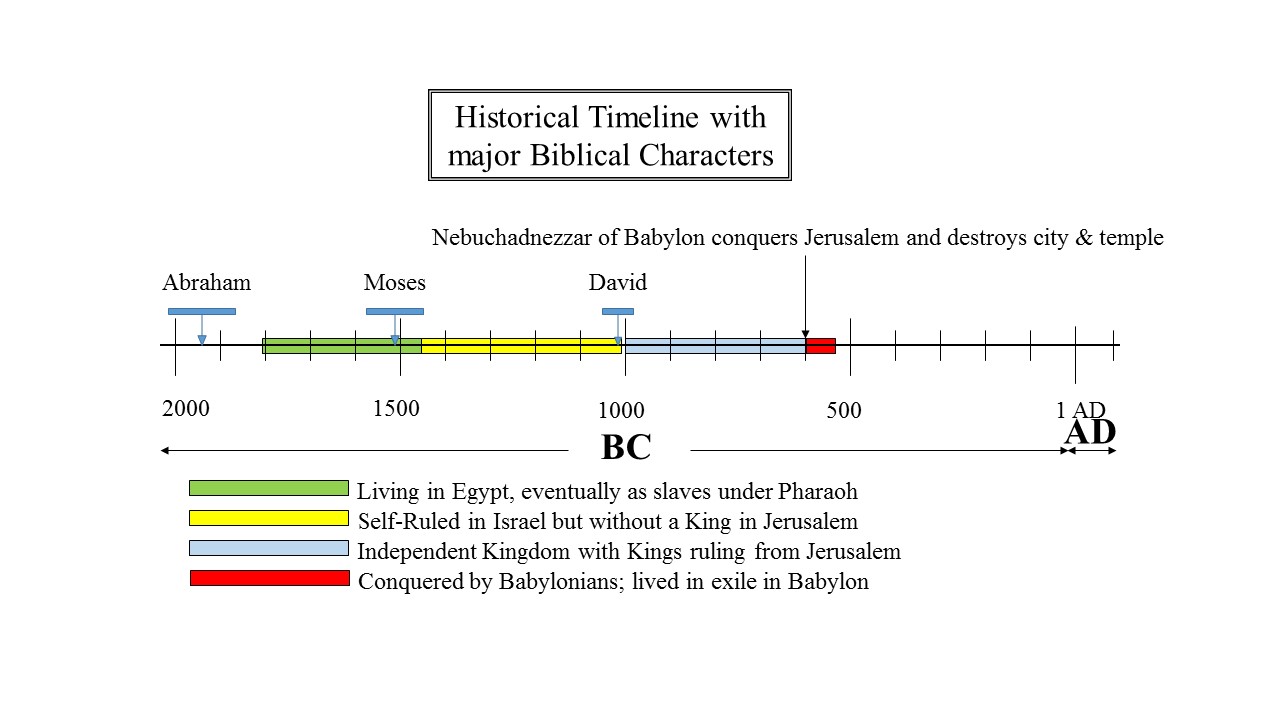 Conquered and exiled to Babylon

So for 70 years, the period shown in red, the Israelites lived as exiles outside the land promised to Abraham and his descendants.

Return from Exile under the Persians

After that, the Persian Emperor Cyrus conquered Babylon and Cyrus became the power of the world. He permitted the Jews to return to their land. 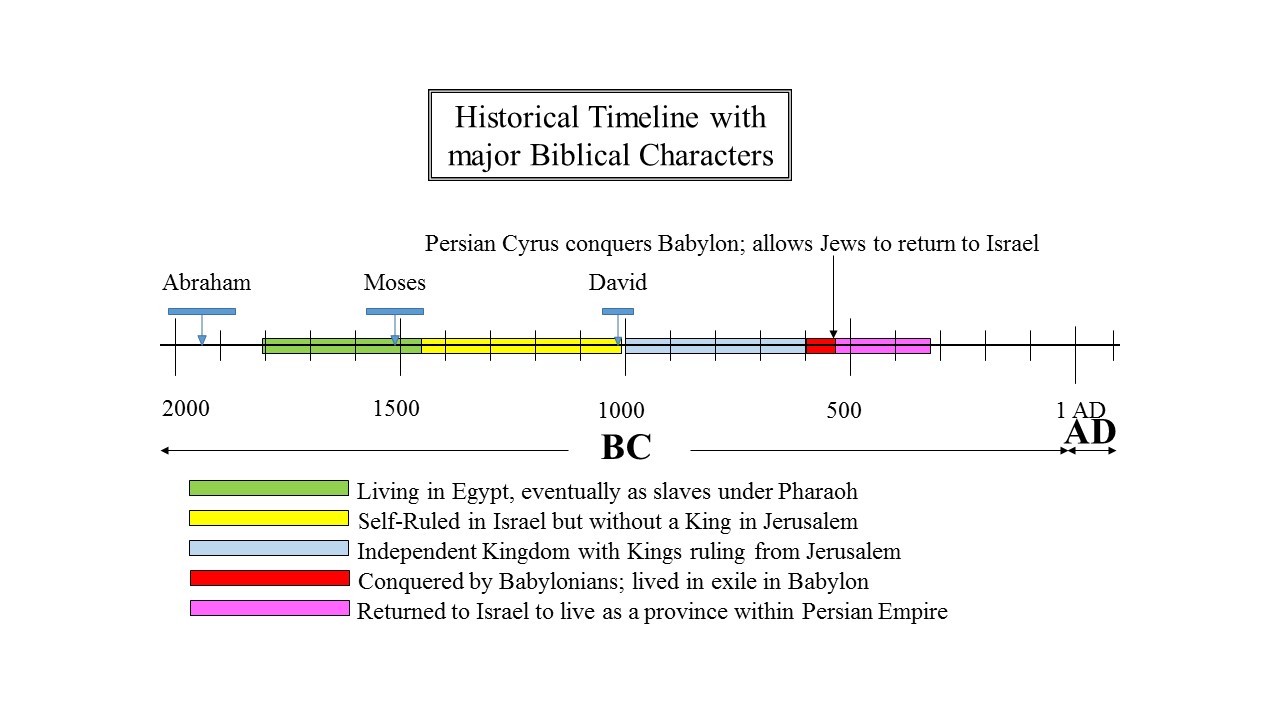 Living in the Land as a part of Persian Empire, 2nd Temple period begins

However they were no longer an independent country, they were now a province in the Persian Empire.  This continued for 200 years and is in pink in the timeline. During this time the Jewish Temple (known as the 2nd Temple) and the city of Jerusalem were rebuilt.  Esther (from which Purim is celebrated) and Ezra & Nehemiah lived in this time period.

The period of the Greeks

Alexander the Great conquered the Persian Empire and Jews had a province in the Greek Empires for another 200 years. This is shown in dark blue.  Later Greek rulers tried to force Greek worship upon the Jews, resulting in the Maccabean revolt, and semi-independence until the Romans came.  Hanukkah is celebrated from this time period. 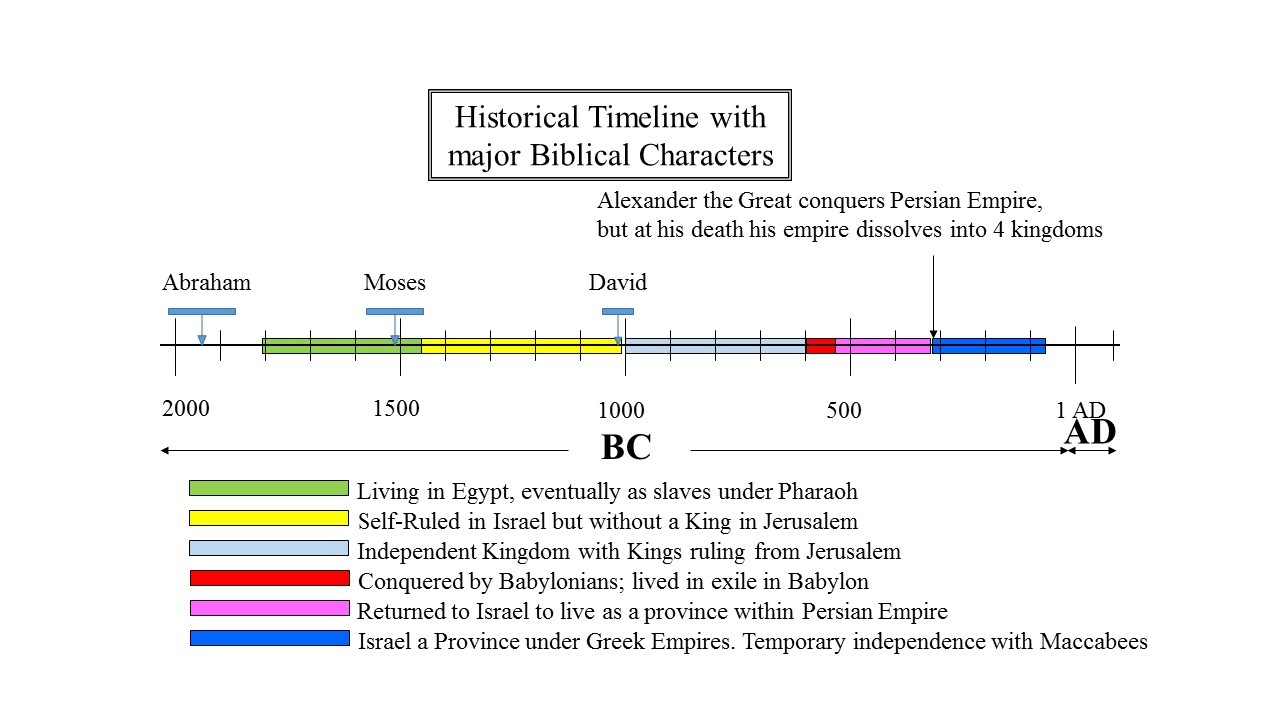 Living in the Land as part of Greek Empires

The Romans became the dominant world power. The Israelites again became a province in this Empire and it is shown in light yellow. This is the time when Yeshua (Jesus) lived, from whom the Messianic hope spread mostly to Gentiles in what is known today as Christianity.  This explains why Romans and Roman government is so prominent in the New Testament – because Rome ruled supreme at that time. 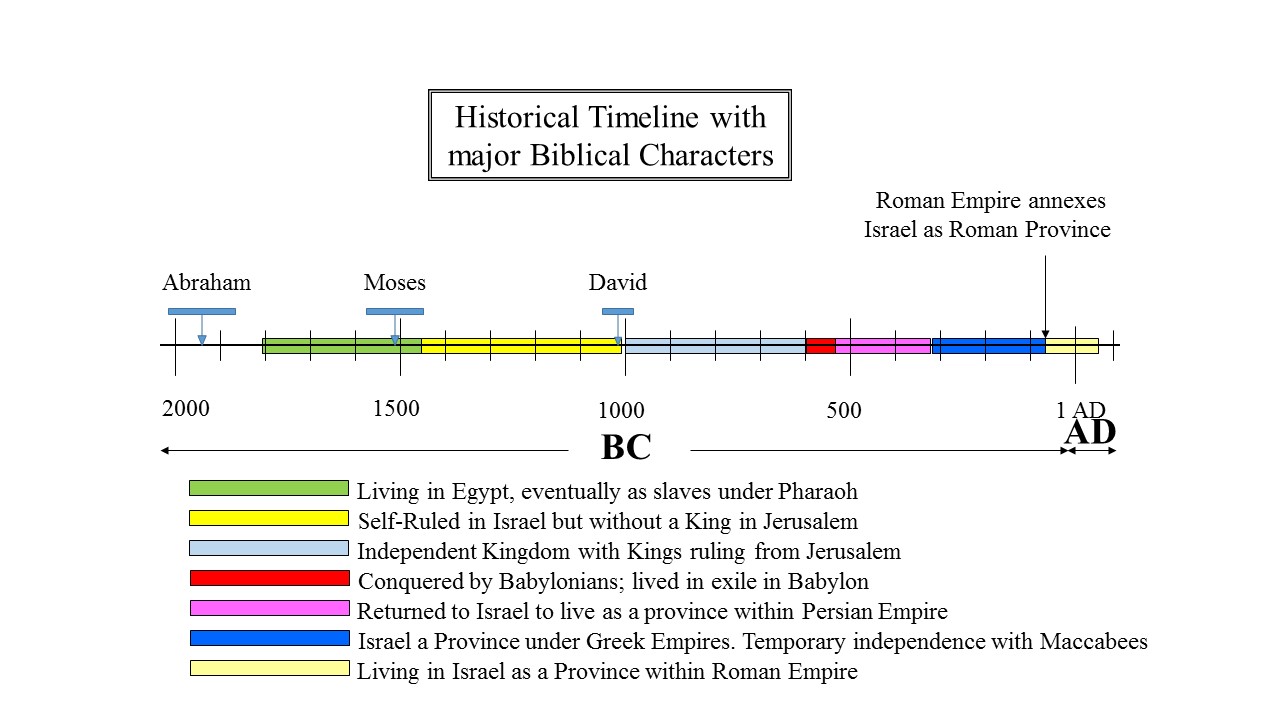 Living in the Land as part of Roman Empire

Second Jewish exile under the Romans

From the time of the Babylonians (600 BC) the Israelites (or Jews as they were called now) had not been independent as they had been under the Kings of David. They were ruled by other Empires.  Resentment of this finally boiled over and the Jews revolted against Roman rule.  The Romans came and destroyed Jerusalem (70 AD), burned down the 2nd Temple (only the Kotel remains to this day), and deported the Jews as slaves across the Roman Empire. This was the second Jewish exile. Since the Roman Empire was so large the Jews were scattered across the whole world.  The tragedy of Masada occurred in this revolt.  A further revolt in 135 AD led by Simon bar Kokhba again resulted in defeat and Jews were not permitted to remain in the land.  Rome renamed Judea as Syria Palaestina (where we get the modern word Palestine) and Jerusalem (still in ruins from 70 AD) to Aelia Capitolina. 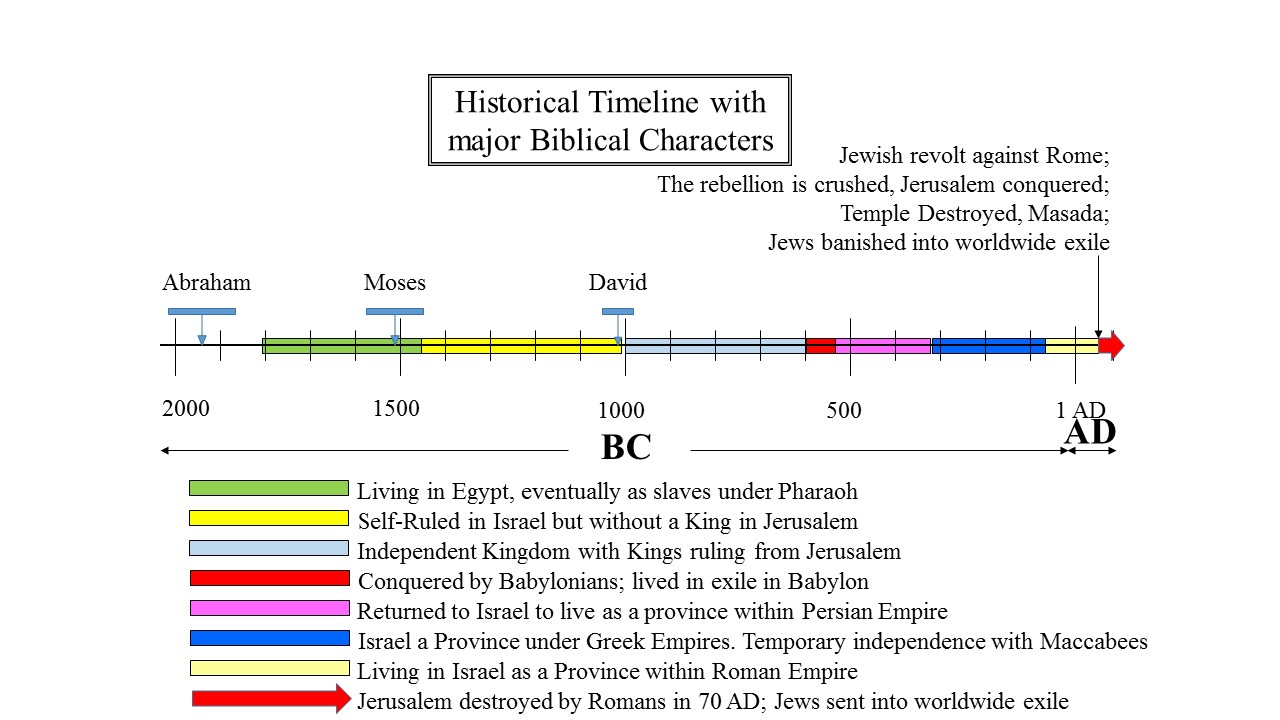 Jerusalem and Temple destroyed by Romans in 70 AD. Jews sent into world-wide exile

And this is how the Jewish people lived for almost 2000 years: dispersed in foreign lands and never accepted in these lands. In these different nations they regularly suffered anti-semitic persecutions.  Persecution of the Jews was particularly true in Christian Europe.  From Spain (all Jews expelled from Spain in 1492), across Western Europe, to Russia (intense pogroms by the Tsars in 1880’s) the Jews lived often in a dangerous situations in these kingdoms and also in the Islamic caliphates. The Curses of Moses from 1500 BC were accurate descriptions of how they lived.

… Among those nations you will find no repose, no resting place for the sole of your foot. There the Lord will give you an anxious mind, eyes weary with longing, and a despairing heart. (Deuteronomy 28:65)

The Curses against the Israelites were given to make peoples ask:

All the nations will ask: “Why has the Lord done this to this land? Why this fierce, burning anger?”

And the answer was:

“ … the Lord uprooted them from their land and thrust them into another land…” (Deuteronomy 29:24-25)

The timeline below shows this 1900 year period. This period is shown in a long red bar in a timeline extending to modern-day. 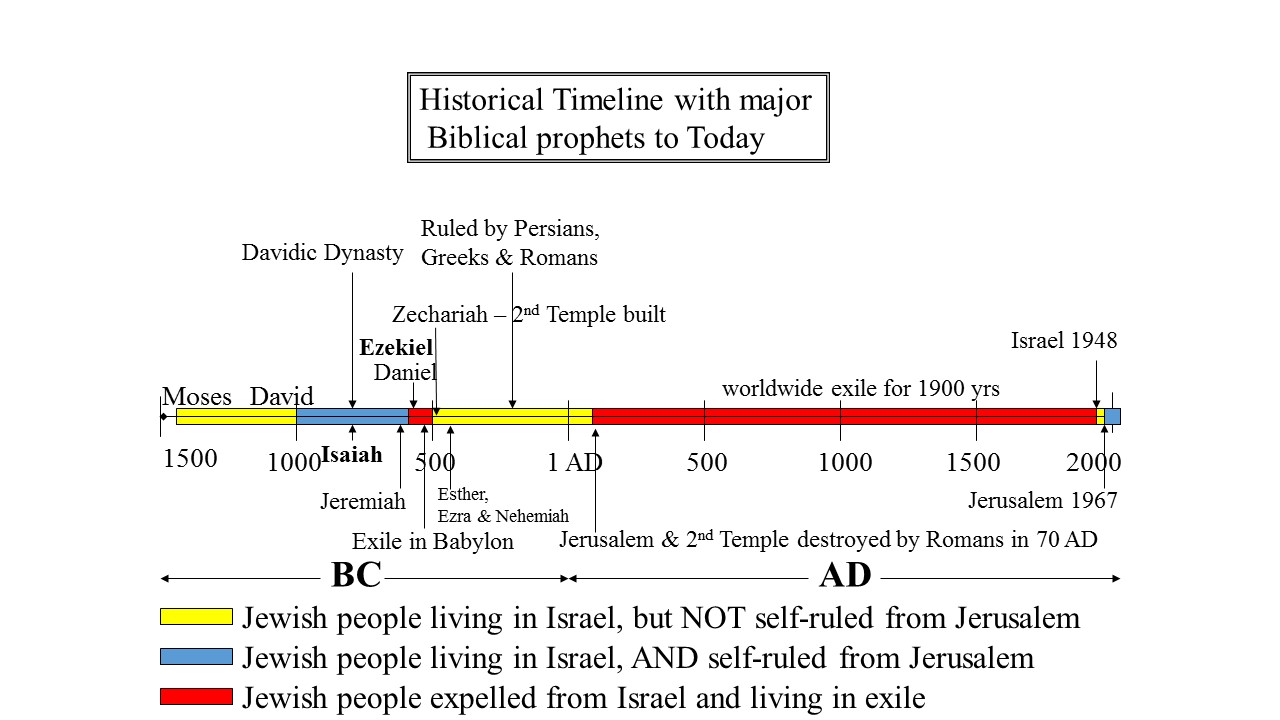 You can see that the Jewish people went through two periods of exile but the second exile was much longer than the first exile.

Anti-Semitism reached its peak when Hitler, through Nazi Germany, tried to exterminate all the Jews living in Europe with the Shoah. He almost succeeded but he was defeated and a remnant of Jews survived.

The fact that there were people who identified themselves as ‘Jews’ after many hundreds of years with anti-semitic persecutions and without a homeland and language was remarkable. But this allowed the final words of Moses in the Torah, written down 3500 years ago, to come true.  In 1948 the Jews, through the United Nations, saw the remarkable re-birth of the modern state of Israel, as Moses had written centuries before:

It was also remarkable since this state of Israel was birthed in spite of great opposition. Most of the surrounding nations waged war against Israel in 1948 … in 1956 … in 1967 and again in 1973. Israel often was at war with five nations at the same time. Yet not only did Israel survive, but the territories increased. In the war of 1967 Israel regained Jerusalem, their historic capital city David had founded 3000 years ago.  The ongoing conflicts with surrounding peoples has created one of the most difficult security problems in the world today.  Though Abraham’s descendants now have an independent state, the blessing promised so long ago to Abraham seem elusive still.

70 thoughts on “What was the History of the Jewish People?”