Shoah in the Bible?

Two events have dramatically impacted the welfare of Jews in modern times.  The remarkable re-birth of the Nation of Israel, and its growing prosperity, today is the more visible of these two events.  But just a little further back in time lurks the second event – the Holocaust or Shoah.  This unspeakable evil saw the murder of 6 million Jews by the Nazis and their collaborators.  Yad Veshem is the best reference for the Shoah.  Here we want to explore whether the Bible had anything to say about it.  That may sound absurd since the last book of the Tanakh was written about 2400 years ago.  How can books written 2400 plus years ago say anything about what happened just over a generation ago?  The prophets of the Bible claimed that G-d inspired their writings, and as proof, made many detailed prophecies of the future.  The re-birth of Israel, even its date, and the six-day war of 1967 were predicted by these prophets of the Tanakh.  So is it conceivable that they also foresaw the Holocaust?

Moses had predicted the expulsion of the Jews from the land of Israel, which happened twice.  The prophecies of Moses, though matching these exiles, do not describe the Holocaust.

But Psalm 102 does.  We may not see it because it is written in the first person so we assume it is only describing the Psalmist’s life.  But other passages in the Tanakh are also written in first person but are not ultimately referring to the writer.  For example, Psalm 16, written by King David, states that G-d ‘will not abandon me to the realm of the dead’ (v.10).  But David has been buried in Jerusalem for 3000 years, so the ‘me’ must refer to someone else.  For this reason, many think that this is a Messianic Psalm, and not about David per se, even while it is written through his eyes.

The ‘I’ in Psalm 102 describes a communal experience.  Thus the ‘I’ could very well have the Jews in mind.  So let’s take a look at Psalm 102 to see if it describes the Holocaust.

1 Hear my prayer, Lord;
let my cry for help come to you.
2 Do not hide your face from me
when I am in distress.
Turn your ear to me;
when I call, answer me quickly.

3 For my days vanish like smoke;
my bones burn like glowing embers.
4 My heart is blighted and withered like grass;
I forget to eat my food.
5 In my distress I groan aloud
and am reduced to skin and bones.

The psalmist is in great distress.  His distress centers on his life vanishing up in smoke while his bones burn – bringing to mind the ovens of the death camps like Auschwitz where smoke rose continuously as the bodies – and bones – were burned.  Holocaust victims, being emaciated skeletons, fit the Psalmist description as being ‘withered’ and ‘reduced to skin and bones’.

At a recent Holocaust memorial service I heard a survivor describing his isolation as he hid for two years behind a false wall in the upstairs attic of a rundown mill.  Feeling like a ‘lonely bird on a roof’, the psalmist describes a similar experience of isolation.  The owl is an unclean animal (Leviticus 11:16-18).  The movie Zookeeper’s Wife describes how Jews were fed pork at the Warsaw zoo and how pork was smuggled into the ruins of the ghetto to feed the people.  Their choice was to be unclean or to starve in their ruined ghetto. 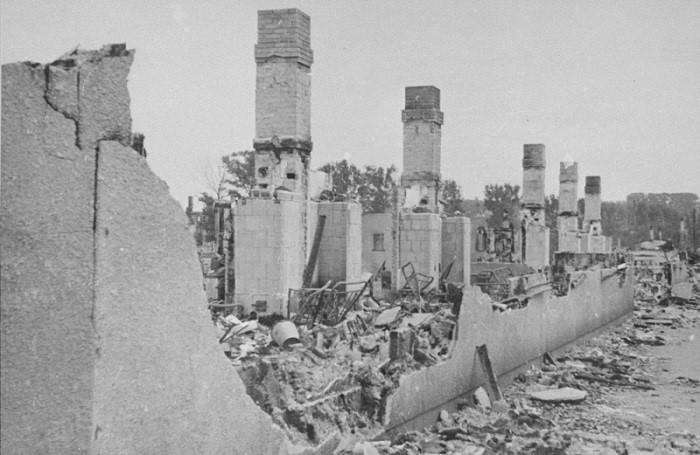 8 All day long my enemies taunt me;
those who rail against me use my name as a curse.
9 For I eat ashes as my food
and mingle my drink with tears

Under the Nazis and their collaborators the term ‘Jew’ was used as a curse and Jews across Europe were taunted while millions were reduced to ashes.

10 because of your great wrath,
for you have taken me up and thrown me aside.
11 My days are like the evening shadow;
I wither away like grass.

The inescapable conclusion for those going through the Holocaust was that G-d had indeed thrown them aside in great wrath.  Approaching sunset (‘the evening shadow’) describes the psalmist’s desperate sense that his life will end shortly, and captures the same desperation felt by those in the Shoah knowing their days would end shortly.

12 But you, Lord, sit enthroned forever;
your renown endures through all generations.
13 You will arise and have compassion on Zion,
for it is time to show favor to her;
the appointed time has come.
14 For her stones are dear to your servants;
her very dust moves them to pity.
15 The nations will fear the name of the Lord,
all the kings of the earth will revere your glory.
16 For the Lord will rebuild Zion
and appear in his glory.
17 He will respond to the prayer of the destitute;
he will not despise their plea.

The tone and perspective of the Psalm now changes.  The focus is on Hashem who will ‘rebuild Zion’ at the ‘appointed time’ and use the nations to do so.  Though it would have been impossible to imagine it in the depths of the Holocaust, barely three years after it was over, Israel was born, through a mandate of the nations in the UN.  Shortly thereafter, Zion itself was restored to the Jews and they have rebuilt it.  The Psalmist’s abrupt and unexpected transition from the horrors of his affliction to the rebuilding of Zion, foresaw the same abrupt and unexpected transition from the horrors of the Shoah to the building of the modern state of Israel.

18 Let this be written for a future generation,
that a people not yet created may praise the Lord:
19 “The Lord looked down from his sanctuary on high,
from heaven he viewed the earth,
20 to hear the groans of the prisoners
and release those condemned to death.”
21 So the name of the Lord will be declared in Zion
and his praise in Jerusalem
22 when the peoples and the kingdoms
assemble to worship the Lord.

The Psalmist clearly states that the Psalm was not written for himself or for his generation.  It was written for a ‘future generation’ – for those who were not yet a people, or nation.  This Psalm was written for the generation just before Israeli Independence (‘A people not yet created’) who would see the creation of the nation centered on Zion (Jerusalem).  That was the generation that lived through the Holocaust, those that were ‘condemned to death’ but were ‘released’ so that G-d could be praised in Zion.  We see the future-focus of the Psalm here as well as a communal emphasis.  No longer is it an ‘I’ but it is ‘a people’ released from death.  It anticipates the Jewish generation that survived the Holocaust to see the state of Israel born.

In the course of my life he broke my strength;
he cut short my days.
24 So I said:
“Do not take me away, my God, in the midst of my days;
your years go on through all generations.
25 In the beginning you laid the foundations of the earth,
and the heavens are the work of your hands.
26 They will perish, but you remain;
they will all wear out like a garment.
Like clothing you will change them
and they will be discarded.
27 But you remain the same,
and your years will never end.
28 The children of your servants will live in your presence;
their descendants will be established before you.”

The Psalmist closes with the reminder of the unchanging nature of G-d, even as all things in the physical world wear out and decay.  Then it is promised that the ‘children’ of the servants who passed through the great affliction (i.e. the Jews born after the Holocaust) will be ‘established’ before this unchanging G-d.

The description of the afflictions, the abrupt transition to the rebuilding of Zion, and that it was specifically ‘written for a future generation’ which would see G-d ‘release those condemned to death’ make it reasonable that the Psalmist was, thousands of years ago, foreseeing the affliction of the Shoa.  Of course, many of us today find it difficult to  accept the idea of prophetic foretelling.  But given that the warnings in the Tanakh about exile into foreign Gentile lands, the re-gathering back to Israel and Jerusalem, including even the timing, are verifiable prophecies, we should at least be open-minded about it.

If there is even a possibility that Psalm 102 was prophesying the Shoah and subsequent rebuilding of Zion then that leaves an important question for us.  After all, the Psalm does conclude with

The children of your servants will live in your presence;
their descendants will be established before you.

It is essential for the ‘children of your servants’ (the generation after the Holocaust) to understand what it means to ‘live in your presence’ and to ‘be established before you’.  After all, Psalm 102 moves to this conclusion.  Perhaps the Divine Author inspiring the human Psalmist is calling those on the Post-Holocaust side of history to seek out His Presence.  Here is His Promise for those who do:

You make known to me the path of life;
you will fill me with joy in your presence,
with eternal pleasures at your right hand. (Psalm 16:11)

Perhaps a good place to start is with Abraham.