2. But Corrupted … like orcs in Lord of the Rings

The Tanakh is remarkable in that, though it is the foundation for Jewish heritage, culture and history, it also includes all nations and peoples in its scope.  When the Bible begins with creation and declares that man was created ‘in the image of G-d’  this includes all peoples, Jew and Gentile.  This explains why all human life is precious.  However, the Tanakh continues on from creation to reveal a serious problem – highlighted in this Psalm of David.

The LORD looks down from heaven on the sons of men to see if there are any who understand, any who seek God. All have turned aside, they have together become corrupt; there is no one who does good, not even one. (Psalm 14:2-3)

Since this says that ‘all’ of us have ‘become corrupt’ it also includes all peoples and nations.  Though we were all made ‘in the image’ of G-d, blessed be He, something has wrecked this image in us so that, from G-d’s point-of-view, we are now corrupt.  Corruption is shown in a chosen independence from G-d (‘all have turned aside’ from ‘seeking G-d’) and also in not doing ‘good’ – not even one of us! 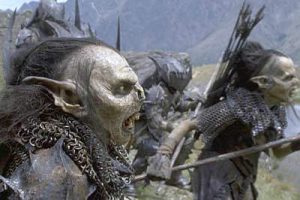 Orcs are ugly in so many ways, but they were simply corrupted elves

To understand this, compare orcs and elves from the movie Lord of the Rings. Orcs are ugly and evil.  Elves are beautiful and peaceful (ex. Legolas).  But orcs had once been elves that Sauron had corrupted in the past.  The original elf image had been wrecked in the orcs.  In a similar way the Psalm says that all people have become corrupted.

The elves, like Legalos, were noble and majestic.  That image was corrupted in orcs

God had made elves but we have become orcs.

For example, we understand ‘right’ and ‘wrong’ behaviour.  But we do not consistently live by what we know. Like a computer virus that damages the proper workings of a computer, our moral code is there – but it is infected. The Biblical view of mankind begins with all people as good and moral, but then also corrupted.  This fits with what we observe about ourselves, and the world around us. In all nations and down through history, mankind has failed to consistently live up to the moral high road that we sense with our conscience.  But this raises a question: why did God make us this way? We know right and wrong yet are corrupted from it. As atheist Christopher Hitchens complains about the 10th commandment prohibiting coveting:

“… If god really wanted people to be free of such thoughts [i.e., coveteous ones], he should have taken more care to invent a different species.”  Christopher Hitchens.  2007.  God is not great: How religion spoils everything.  p. 100

But he misses that the Bible does not say that G-d made us this way, but that something terrible happened after we were made. The first humans revolted against God and in their rebellion they changed and were corrupted.

The Fall of Mankind

This event is sometimes called The Fall.  Adam, the first man, was created by G-d and there was an agreement between them, like a marriage contract of faithfulness. The book of Hosea in the Tanakh describes it like this:

Like Adam, they have broken the covenant… (Hosea 6: 7a)

Adam broke the covenant or agreement he had made with G-d.  The consequences of that affect all peoples, both Jew and Gentile, even today.  The promises of G-d to Israel, the Bible, and even Israel itself are impossible to understand if we ignore what Adam did and the results that followed.  In fact, though the events of Adam happened long before Abraham lived, the seeds of Israel itself are bound up in the events of Adam.  To understand why we need to observe what happened with Adam.