The Sign of the Branch: The Dead Stump reborn – in Messiah

We learned that both the terms ‘Messiah’ and ‘Christ’ originate in the Tanakh and that they are equivalent titles.  The use of this title ’Messiah’ to signify a coming ruler, a ‘Son of God’, in Psalm 2 opened the door for related themes that later books in the Tanakh developed.  Isaiah (750 BCE) initiated this with the Branch of the Lord.

Isaiah and the Branch

Isaiah wrote in the First Temple Period during the Davidic dynasty. In his day (ca 750 BCE) the dynasty and the kingdom was corrupt. Isaiah pleaded that the Kings return back to G-d with the practice and spirit of the Mosaic Law.  But Isaiah knew that Israel would not repent, and so he also prophesied that she would be destroyed and the royal dynasty would end.  Isaiah chapter 3 details this coming judgment.  But then the book changes its tone and foresees:

In that day the Branch of the Lord will be beautiful and glorious, and the fruit of the land will be the pride and glory of the survivors in Israel. (Isaiah 4:2)

He does not give much detail about this coming Branch, but a little further on, he explains what he foresaw with a specific metaphor, or image, of the royal dynasty – picturing it like a great tree. This tree had at its root Jesse, the father of King David. On Jesse the Dynasty was started with David, and from his successor, Solomon, the tree continued to grow and develop.

First a Tree … then a Stump … then a Branch

Isaiah wrote that this ‘tree’ would soon be cut down, reducing it to a stump. Here is how he pictured this ‘tree’, which then he turned into the riddle of a stump and Branch:

“A shoot will come up from the stump of Jesse; from his roots a Branch will bear fruit. The Spirit of the LORD will rest on him–the Spirit of wisdom and understanding, the Spirit of counsel and of power, the Spirit of knowledge.” (Isaiah 11:1-2)

David’s Dynasty pictured as a Stump of Jesse

The cutting down of this ‘tree’ happened about 150 years after Isaiah, in 586 BCE, when the Babylonians conquered Jerusalem and dragged its people and king to Babylon (the red period in the timeline above). Jesse was the father of King David, and so was the root of David’s Dynasty. The ‘stump of Jesse’ was therefore a metaphor to the coming shattering of David’s dynasty.

The Branch: A coming ‘him’ from David possessing wisdom

But this prophecy also looked further into the future than just the cutting down of the kings. Isaiah predicted that though the ‘stump’ would look dead (as stumps do), one day in the further future a shoot, known as the Branch, would emerge from that stump, just like shoots can sprout from tree stumps. This Branch is referred to as a ‘him’ so Isaiah is talking about a specific man, coming from the line of David after the dynasty would be cut down. This man would have such qualities of wisdom, power, and knowledge it would be as if the very Spirit of G-d would be resting on him.  This was a prophecy of the coming of the Messiah, using the theme of ‘Branch’.

Jeremiah and The Branch 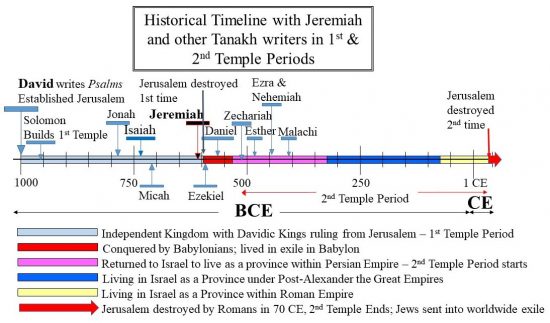 Jeremiah in Historical Timeline with other writers of Tanakh

Like a signpost laid down by Isaiah in history, it was only the first in a series of signposts that developed this theme of the coming ‘Branch’.  Jeremiah, living about 150 years after Isaiah, when David’s dynasty was being cut down before his very eyes wrote:

“The days are coming,” says Adonai
when I will raise a righteous Branch for David.
He will reign as king and succeed,
he will do what is just and right in the land.
In his days Y’hudah will be saved,
Isra’el will live in safety,
and the name given to him will be
Adonai Tzidkenu [Adonai our righteousness] (Jeremiah23:5-6)

The Branch: ADONAI our Righteousness

What will this Branch be called? He would be called the ADONAI who will also be ‘our’ (that is – us humans) Righteousness. As we saw with Abraham, the problem for humans is that we are ‘corrupt’, and so we need ‘righteousness’.  In naming the Branch Adonai our Righteousness, Jeremiah hints that people in his future would get needed ‘righteousness’ from the LORD – ADONAI himself.  But how would this be done?  Zechariah provides the answer as he develops this theme of the Coming Branch further, prophesying even the name of the Messiah – which we look at here.